2022 Sculpture in the Garden Series

A hidden gem on the North Fork of Long Island, Landcraft Gardens offers four acres of botanical gardens surrounded by nearly ten acres of meadows, which are open to the public on Fridays and Saturdays. The Foundation seeks to activate the artistic community of the North Fork with annual exhibitions that provide opportunities to view sculpture in dialogue with natural flora. The inaugural Sculpture in the Garden series launched in summer 2021 with the work of artist Ned Smyth, also curated by Rondinone.

“Sam Moyer and Eddie Martinez’s sculptures focus on interactions between the animate and inanimate, between the marriage of sculpture and soil and the ephemeral quality of light, that let us see things,” says Rondinone.

Martinez, an influential abstract painter, began creating sculpture in 2013, collecting found objects on the beaches of the North Fork of Long Island and on the streets around his Brooklyn studio, including cardboard, wood, plastic, rubber, bottle caps, and metal grills, along with such marine detritus as old buoys and lobster traps. The raw materials were arranged into improvised configurations and then cast in bronze, transforming their presence while preserving their forms. The sculptures are finished with oil, enamel, and spray paint. While nonrepresentational, they suggest human and animal forms that parallel those found in his paintings.

Ranging from four to six feet in height, Moyer’s Dependents series references codependency, and while it is understood as emotionally exploitative in human relationships, it is an essential condition of sculpture and architecture, which require systems of support such as joints, hinges, and counterweights in order to function. Moyer’s Dependents sculptures from 2021 comprise two separate entities: one made from aggregate concrete, the other a piece of Belgian Bluestone. Married by a rough hand-drawn joint, inspired by Japanese joinery, one cannot stand without the other.

Working in between the lines of representation and abstraction, Eddie Martinez (b. 1977, Groton Naval Base, Groton, Connecticut) paints in oil, enamel, and spray paint while often incorporating found objects picked up from his studio floor, in a fast-paced practice that could be compared to automatism. Noted for his deft draftsmanship, Martinez creates large-scale works that maintain the feeling of drawings. His most apparent visual references are the CoBrA group and Abstract Expressionism. In addition to his paintings, Martinez creates found-object sculptures and works on paper. A number of his works in Sculpture in the Garden 2022 were seen recently in the exhibition Beach Bronze at Lévy Gorvy, Palm Beach and in 2018 at Frieze London in a solo booth at Timothy Taylor Gallery, London. Last year, his work was on view at Blum & Poe, Los Angeles; Perrotin, Shanghai; Loyal Gallery, Stockholm; and Mitchell-Innes & Nash, New York. Museum exhibitions include the Yuz Museum, Shanghai, China and Museum of Contemporary Art, Detroit in 2019; and The Bronx Museum in New York in 2018. He lives and works in Brooklyn and Orient, New York.

During the run of Sculpture in the Garden 2022, an exhibition of work by Sam Moyer and Eddie Martinez will open at the South Etna Montauk Foundation, Adam Lindemann and Amalia Dayan’s art foundation in Montauk. Comprising new and recent work, this exhibition will open during the first week of July 2022.

2021 Sculpture in the Garden Series

Ambulating through the four acres of the Landcraft’s botanical gardens, visitors encountered several monumental sculptures by Ned Smyth sited in dialogue with specific landscapes and the surrounding natural flora. Entitled Life, this exhibition focused on a critical juncture of Smyth’s oeuvre that he forged in the 1970s, at a moment in which he moved away from the orthodoxies of Minimalism. 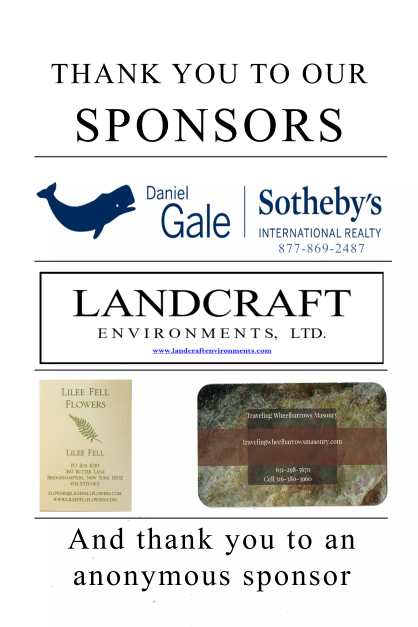 Become A Member Today: Join or Renew Your Membership